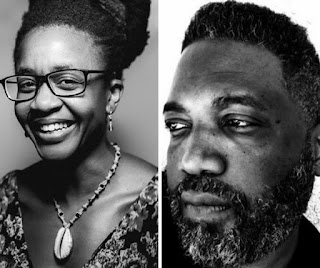 Nnedi Okorafor and Selwyn Seyfu Hind
Dear readers, we are beyond delighted to announce that there is FINALLY an update on HBO’s Adaptation of Nnedi Okorafor’s Who Fears Death.
George R. R. Martins, author of Game of Thrones, who is one of the executive producers on Who Fears Death announced, on his LiveJournal page, that the show now has a scriptwriter.
Selwyn Seyfu Hinds was selected as scriptwriter after a rigorous screening process headed by HBO’s development executives, Michael Lombardo and Angela Mancuso, and Okorafor. The team fell in love with “what Selwyn had to say about WHO FEARS DEATH, and how he would like to bring it to the screen.”
It is nice to see Okorafor deeply involved in the production process. Martin reports that she was in the room in L.A. with the development team interviewing scriptwriters. She did disclose, at the time of the initial announcement, that she planned on being part of the creative process. So skeptics should please take a seat.
Martin also wants fans to know that he is not driving the project. It is possible that he was referring to this piece published on Variety. He cautions fans against making the project about him by reminding them that he was asked by Okorafor and the development team to join the project. Not the other way round.
Read Matin’s full statement here:

We’ve found our scriptwriter for WHO FEARS DEATH, the television series we’re developing for HBO based on the award-winning novel by Nnedi Okorafor.
His name is SELWYN SEYFU HINDS. He’s written television, film, comics, journalism, history. He’s a producer as well, and will be a co-executive producer on WHO FEARS DEATH, as well as writing the pilot. We’re very excited to have him aboard… and to finally be able to announce it, now that his deal has closed (these things take a while).
It was not an easy selection. We considered dozens of terrific writers, finally winnowed it down to half a dozen strong finalists, and interviewed each of them at length. I was not able to be in LA for the interviews myself, thoughI took part by phone… but executive producers Michael Lombardo and Angela Mancuso, our development executives from HBO, and of course Nnedi Okorafor were all in the room for every interview. All of us loved what Selwyn had to say about WHO FEARS DEATH, and how he would like to bring it to the screen. It’s a powerful book, but not an easy adaptation by any means… but we think we’ve found the right writer for the assignment.
I was also pleased to see Michael Lombardo and Angela Mancuso finally credited in the news stories about Selwyn and WHO FEARS DEATH, since the last round of stories made it sound as if I was doing it all by myself. Even now, though, some of these stories are getting it backwards, talking about how I “added” Lombardo and Mancuso. Ah, no… rather, they (and Nnedi) added me. This was their project from the start, I’m the new guy in the boat. But I’m thrilled to be here, and I’m excited to be working with Michael, Angela, Nnedi, and now Selwyn. We all share the same goal: to make this extraordinary novel into an extraordinary television series.

Praise Osawaru is a writer, poet, content developer and entrepreneur-in-training. His works have appeared in Black Youth, Nantygreens, Sprinng Literary Movement and Writers Space Africa. He was longlisted for African Writers Award 2019 and Shortlisted for The Zi Prize 2019. Follow him on Instagram/FB/Twitter: @wordsmithpraise
@wordsmithpraise
Previous Nnedi Okorafor Secures Yet Another High-profile Deal with Marvel Comics
Next Creative Writing 101 | A beginner’s guide to creative writing