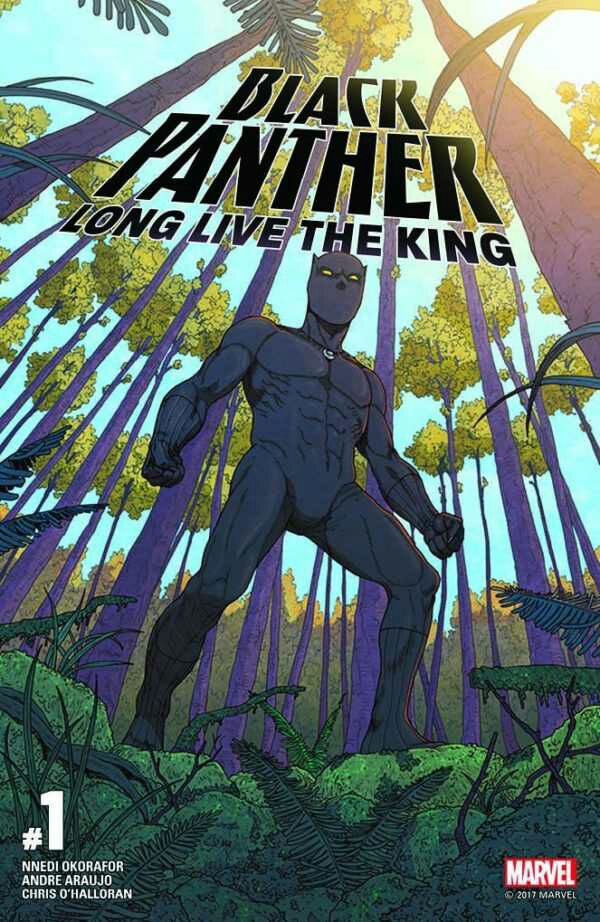 In the wake of her HBO deal and a comic short with Marvel’s Vernomverse imprint, Nnedi Okorafor lands yet another high-profile deal with Marvel.

The highly anticipated Black Panther movies comes out next year on February 9. To keep fans excited about the release, Marvel has asked the Hugo and Nebula award wining novelist Okorafor to contribute to the series. How exciting!
Black Panther is a comic book story line that first appeared in 1966. It tells the story of T’Challa, the head of the fictitious African country Wakanda, and his exploits as a superhero named Black Panther.
Okorafor has been commissioned to expand the story line by writing three issues in Marvel’s digital-first series. Her twitter message suggests that there could be more issues. 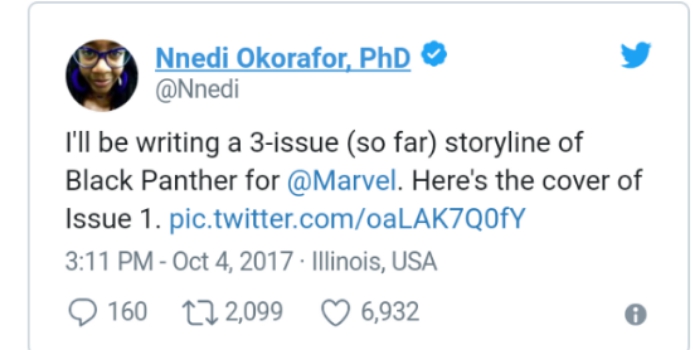 Her stories will be published under the title Black Panther: Long Live the King.
According to The Hollywood Reporter, the three-issue release will debut under Marvel’s ComiXology imprint. It will be released bi-weekly starting from December 13.
By contributing to the series, Okorafor is in very fine company. Ta-nehisi Coates and Roxane Gay have been contributors in the past. We are curious about how Okorafor, as an African writer, might imagine Wakanda and approach the characters differently. Fingers crossed.
Okorafor said on Facebook that she has written the first issue and has the summaries for the other two detailed. Ever the hardworking writer!
Congrats to Okorafor!
Source: www.brittlepaper.com

Praise Osawaru is a writer, poet, content developer and entrepreneur-in-training. His works have appeared in Black Youth, Nantygreens, Sprinng Literary Movement and Writers Space Africa. He was longlisted for African Writers Award 2019 and Shortlisted for The Zi Prize 2019. Follow him on Instagram/FB/Twitter: @wordsmithpraise
@wordsmithpraise
Previous How To Create An E-book | An Easy Guide
Next “We’ve Found Our Scriptwriter for Nnedi Okorafor’s Who Fears Death” – George R. R. Martins