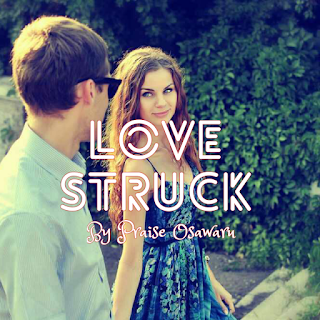 “Hey, Daniel? John asked, putting his hands on my shoulder.

“Do you know who that is? He doesn’t look like a student,” I replied.
“That’s timothy. He’s Paula boyfriend from Lagos.”
“How did you know that?”
“Word spreads,” he responded.
Looking at timothy hold Paula by the waist as they walked was stirring up anger within me. If she was already dating someone else, why toil with my feelings?
“I know there are probably a lot of things going on in your head right now. Surely there’s an explanation, so don’t jump into conclusion,” John said in a caring manner.
I looked at John and sighed, “Hopefully”. We went home together; john and i.
The football practice made me weak. My legs were hurting, my head was aching, and my heart felt like it was plunged with a knife. I couldn’t tell if it was the practice or the incident with Paula. I wasn’t sure what I felt.
I headed straight to the bathroom to take a shower. Whilst bathing, I began to feel as though my chest was on fire, like my heart wanted to explode. I got lost for some minutes till john banged the door.
“Hey, bro! How long are you going to take a shower?”
“Almost done.”
I was deep in thoughts, I was incognizant of time. It was the first time I’ve ever felt like that; heart broken. I guess john noticed how I felt and wanted to cheer me up. He approached me after I’d showered.
“So why don’t you tell me what you and coach was discussing?”
“Uh….. He said he’d like to see more of me on the field,” I responded, looking the other way.
“Hey bro, don’t look like that. Don’t let what you saw make you feel sad. Everything has an explanation.”
I exhaled, ‘maybe there’s some truth to what he’s saying,’ I thought. I shouldn’t let that bring down my spirit.
*             *             *
Immediately after lectures, I walked up to Paula.
“Hey what’s up?”
“Nothing much,” she responded
I wanted to ask her who that guy that kissed her was. Of course I know who he is but I just wanted to hear it from her.
“Hey, we need to talk,” I replied seriously.
“About what exactly?”
“Why don’t we go to the cafeteria first?”
“No can’t do. I’ve got something to do with someone,” she responded.
This got me thinking, if she wanted to go spend time with timothy.
“Is it that guy you were holding hands with yesterday? Timothy or what’s he called? I asked furiously.
“He’s my……”
“Boyfriend?” I interrupted. “What about me? What am I to you?”
“You never said you wanted us to date,” She responded vehemently.
“So that gave you the right to with my feelings, huh!”
I grasped her hand out of annoyance. I didn’t care if it was hurting her. The anger within me was prevailing.
“Get your hands off her!” someone shouted from behind.
It was timothy, walking up towards me, throwing his fist upon my face and knocking me off my feet. I stumbled upon the floor, my head had begun bleeding, my eyesight blurry. He was about kicking me again, when Paula shouted.
“Stop it. That’s enough!”
She knelt down to touch me but timothy dragged her away. Everyone just stared at me as though nothing had happened; no one offered to help me.
‘This is what I get for loving you,’ I said to myself.
Written by Praise Osawaru
Instagram: @wordsmithpraise.