Breaking News
Home / Articles / [A MUST READ] – SEE THE NEED, TAKE THE LEAD : A REVIEW OF JCIN MAPOLY PROJECT E.O.D

[A MUST READ] – SEE THE NEED, TAKE THE LEAD : A REVIEW OF JCIN MAPOLY PROJECT E.O.D

Poetry 101: There’s No Such Thing As A Perfect Piece.

HOW TO CREATE OPPORTUNITIES #1 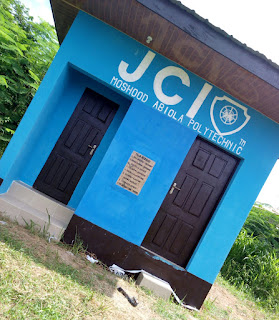 “SEE THE NEED, TAKE THE LEAD”
I’ve seen some crazy circumstances but surely not as crazy as this. I attended a programme which was held for the commissioning of a project by an NGO. It was held at Obafemi Owode Local government nursery and primary school, Alagada, Abeokuta and held by Junior Chambers International, Moshood Abiola Polytechnic (JCIN Mapoly).
The front view of the school alone was frightening; I was amused by the scenery. The walls were made of clay covered with cement. I was surprised that such schools still existed in Nigeria and the government had not taken any action towards reconstruction and renovation. Alright, asides that, whilst I furthered into the inner parts of the school, I realized there were classrooms with collapsed roofs and parents still allowed their children attend such schools.
This organization; JCIN Mapoly observed that the school; both teachers and students practiced open defecation (to defecate openly). Such acts are unhygienic to humans and this had been the routine of the school on a daily basis. Every year, thousands of Nigerians are affected by Urinary Tract Infections (UTI) caused by lack of improper defecation and poor toilet hygiene. What surprises me the most was that a Non-governmental organization identified a problem in the community and decided to proffer a sustainable solution in the form on construction of a two-faced toilet for the school whilst the government sat down and relaxed.
The commissioner for education and Ogun State Universal Basic Education Board were even represented at the commissioning of the toilet. 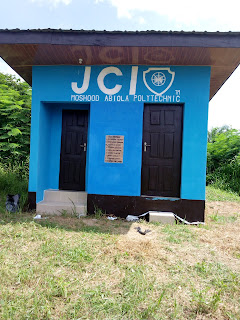 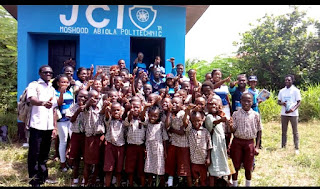 The most beautiful thing was that the students of the school were so joyous and thankful for the newly constructed toilet by JCIN Mapoly.

I, for one recommend that the organization is an impactful organization which I enjoin all young individuals to be a part of.
Finally, a little something I whooped up while typing this. “Wait not for the government and take action towards betterment”
©Praise Osawaru
(@wordsmithpraise)